How to Setup an OpenTX Transmitter for Aura

Yes! FrSky's SBUS works with Aura! And it's the preferred way to to connect and FrSky Receiver to Aura.

With Aura firmware V1.13 (or newer), Aura now can accept FrSky model defaults via SBus. If you update to V1.13 (or newer), you won't need to download the FrSky Transmitter Model File at the bottom of this page. For tips on updating your Aura, please see our section on Updating Aura Firmware.

Start with a Blank Model and reference the Chart! 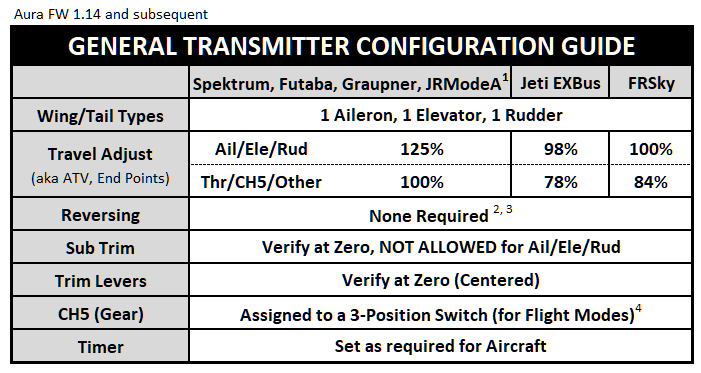 Common Transmitter Settings for Aura5, Aura 8 and Aura Professionals starting with a freshly reset transmitter and maintaining normal wing and tail types. NOTES:
1. JR Mode A is preferred as of Aura FW v1.14. For JR Mode B, see the Aura Wiki
2. If you are using a Futaba transmitter, please note that some Futaba transmitters have the throttle set to reversed by default. Leave reversing set to defaults to start, and reverse as needed.
3. Aileron, Elevator, and Rudder should NOT be Reversed, other channels may be reversed at users preference
4. If Flight Modes are set to a channel other than CH5/Gear, set a 3-position switch to that channel and set CH5/Gear as needed.
5. See the Wiki for further details and latest information, and for Hitec use, etc.

There are three ways to connect the Aura to your FrSky Receiver:

SBUS is modern digital data on one wire (similar to Spektrum SRXL). It gives the Aura precise knowledge of all of the available channels.

PWM (Servo Leads) connect the each channel on your Receiver directly to each Servo Port on the Aura.

PPM (Pulse Position Modulation) all Servo pulses on one wire

General information regarding Installing the Aura.