After mounting the Aura, 3 types of connections must be made to the Aura:

For typical advanced sport aircraft, we recommend using a full-range receiver with a modern Digital Connection rather than traditional PWM Servo Connections.

A modern Digital Connection is Spektrum SRXL, Futaba S.Bus, Graupner Hott SUMD, JR Mode B, etc. A single Male-to-Male servo extension is connected between the Digital Port on your Receiver and 'Port B' on the Aura as shown below.

Some examples of modern Digital Receivers are:

If you are using a modern Digital Receiver Connection to Aura (SRXL, S.Bus, Graupner Hott, JR Mode B), wire the servos as shown below: (This example shows the 'data' path using the 35cc QQ Yak 54 and is typical of .40 cu. in. to 40cc aircraft. Larger and smaller aircraft can also use this 'data' path.)

NOTE: PWM (Pulse Width Modulation) is simply the technical term the Servo Ports/Servo Signal of a Traditional RC Receiver.
A traditional PWM Servo Connection is made using 4 Male-to-Male Servo extensions from the Receiver to the Aura Ports. Connect the Aura to the Receiver and Servos as shown below. (This method strongly connects the Aura Bus (power) to the Receiver Bus with 4 PWM leads.)
It can be used on any size model as long as an appropriate Receiver is chosen, and adequate power is supplied to the common bus.
These example shows typical Dual Elevator (QQ Yak 54) and Single Elevator connections. The user of PWM will typically choose in the Aura Config Tool, Wing types of 1 aileron, 2 elevators if 2 elevators are required (Y-harness ailerons if required). Otherwise, they will typically choose 2 ailerons and 1 elevator. 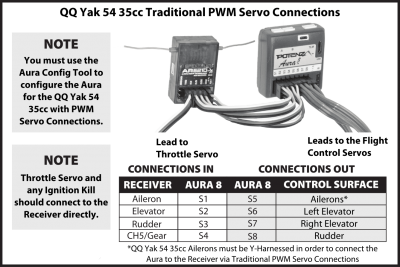 Servo Wiring to the Aura and Receiver using a Traditional PWM Servo Connections from the Receiver and for Dual Elevators. Note the Table shows the CONNECTIONS IN to and OUT of Aura 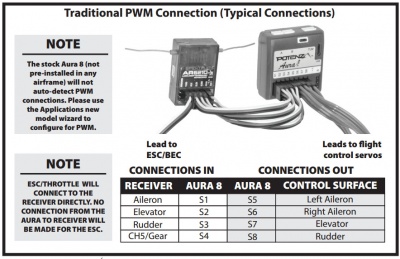 For smaller aircraft, you may use a single battery or BEC of your choice

For 25cc and larger aircraft, we recommended using two batteries for power and redundancy.

We also strongly recommended use an additional 2-Wire Male-to-Male extension between an unused Aura port such as Port S8 and an unused Receiver Port.

Note: Flex Innovations does not test or support the use of high power BEC's or regulators in 20cc or larger Open Stock applications. Selection and use of these products is completely at the discretion of the User.